Here is some good news for our customers who are thinking about running Oracle workloads on NetApp Private Storage for Amazon Web Services (AWS).

Here is the link: http://www.netapp.com/us/system/pdf-reader.aspx?m=tr-4370.pdf

For our NetApp field and partners, you can also find this Technical Report on the NetApp Field Portal.

For the TL:DR crowd:

The Technical Report covers how the test environment was constructed and the testing methodology. What is great about how the testing was done is that we were able to come as close to an "apples to apples" comparison of the performance of Oracle using AWS EC2 compute and local compute running Cisco UCS C220 servers connected to the same NetApp storage via 10Gbps Ethernet network links.

For the test run with the Amazon EC2 computer, we started up the AWS Ec2 compute and mounted the NFS exports on the NetApp storage (located in Equinix), started Oracle, and then ran the same workload test using the SLOB2 utility.

We gathered the performance data statistics from the NetApp storage and from Oracle to generate the following performance graphs. The first graph shows the test with 100% Random 8K Read Workload. 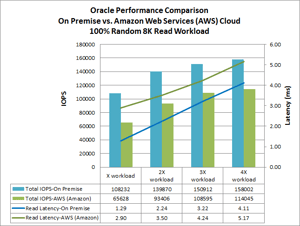 The performance curves show that the latency difference between on premise compute and the AWS EC2 compute is about 1-2ms. This makes sense as the network latency from our lab in Equinix and AWS is about 1-2ms.

Overall, the latency and throughput track together as the workload increases.

The second graph shows the test with a 90% Random 8K and 10% Read workload. 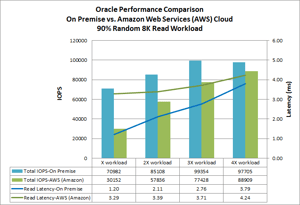 The performance curves for the Cisco UCS compute shows latencies being lowest at low workload levels and then approaches the same latency levels as AWS Ec2 compute at the higher workload levels.

Our testing results show that NetApp Private Storage for Amazon Web Services (AWS), delivers Oracle performance comparable to that of on-premises environments when running comparable workloads. NPS allows customers to benefit from the elasticity and economics of the cloud combined with the control, availability, and performance of NetApp storage.