I was very lucky to be one of the attendees of dockercon 2015. In some ways this was a return to a group that has helped make my career. When I was a new young sysadmin, my first jobs were compiling sendmail, apache, mysql, and a ton of other software for what is now CenturyLink.

I went the the conference for a few reasons.

The enthusiasm was infectious. That could have just been the sinus infection before I went to the conference too though.

It's hard to objectively characterize the docker community right now. There are a lot of voices and a lot of momentum to do some really cool things. I'm certain there will be people that could read this and think I'm against docker. I'm not. I see it solving some of my problems and believe it will have a huge place in technology for a long time right up there with Apache and Linux.

Would I use it to run my business for anything that I considered my bread and butter or how I make my living? Not on your life...yet.

I think the state of docker as a technology can be summed up great by the first General session on day 1. The whole thing is posted on YouTube now, but Solomon Hykes (docker CTO) 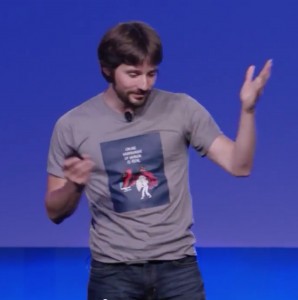 got up and did a long talk about all the new things docker being announced at this conference. There was a little haughty-ness to how he presented. Maybe that's just how I perceived it. Everything will be open and free and solve all your problems. After a while I started to recognize the personality. He's an uber-developer. The one that believes there is no problem ever in his code. It always just works and when you question otherwise, you must have done something wrong. For quite a while in that keynote he outlined how docker was simply going to revolutionize everything connecting technology to ideas. Then he'd turn it over to someone to demonstrate one of the new features and the demo would break. No problem. It's a new feature. We recorded a video of it working too and we'll just flip over to that. Nope. Video doesn't work. Trust us.

Since I've worked in support for so long, I've seen developers do this dance so many times the humor in it is lost on my IT troubleshooting war wounds. My take on the state of docker at the moment is that it's a great idea being created by some brilliant people with a little ways to go before you'd actually want to use it for anything mission critical or enterprise. I found it extremely ironic given all the breaking demos when I got home and pulled out the poster for the conference. 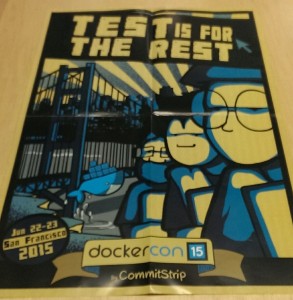 I think docker will do some great things. Like I said before, I'm building a project on docker. I wouldn't trust it too much without more testing. NetApp offers ready-to-use enterprise storage capabilities to docker wherever it goes including Service Providers, Hyperscalers, and traditional physical datacenters, all the way down to laptop enterprise storage solutions. We're excited to further that conversation with docker and customers. It's why we sponsored dockercon and look forward to supporting docker among all of our open source work. We do a lot with openstack, FreeBSD, and Linux also. NetApp has demonstrated for a very long time a commitment to supporting open source while also creating value for customers. Data ONTAP is built on FreeBSD after all.

One of the last things I'll touch on is innovative technology. I love new technology with a passion. The reactions most people have to new technology are predictable from all sides. Some hate new things. Some jump on the newest thing and scream "OMG THIS CHANGES EVERYTHING!!!" and then they do the same thing that all technology that preceded it did. Some companies take their old technology and put a brand new sticker on it and call it new technology. One reason I've worked for NetApp for so long is I have seen us repeatedly create value that wasn't there before. Take Cloud Volumes ONTAP (formerly ONTAP Cloud) for example. Our bread and butter OS that runs on NetApp's FAS enterprise storage offered up as a software only instance in AWS EC2. This isn't a 1.0 hey we can do NFS too from a cloud provider. This isn't a tiny team of new college grads creating an open source NAS offering using words like "High Availability" with zero comprehension of the term. This is the very mature and fully featured Clustered Data ONTAP. I've told people before that I worked for NetApp in support for a very long time. I've seen the stuff NetApp makes break every possible way. I've also seen other storage solutions in a very intimate way with FlexArray (Data ONTAP using someone else's physical disks). I can say with 100% certainty if I left the company and had to make purchasing decisions for storage I would still use NetApp because they take keeping your data safe serious.