What is AWS EKS?

Amazon Elastic Kubernetes Service (Amazon EKS) is a managed AWS Kubernetes  service that scales, manages, and deploys containerized applications. It typically runs in the Amazon public cloud, but can also be deployed on premises. The Kubernetes management infrastructure of Amazon EKS runs across multiple Availability Zones (AZ). AWS EKS is certified Kubernetes-conformant, which means you can integrate EKS with your existing tools.

How Does Amazon EKS Work?

EKS clusters are composed of the following main components—a control plane and worker nodes. Each cluster runs in its own, fully managed Virtual Private Cloud (VPC).

The control plane is composed of three master nodes, each running in a different AZ to ensure AWS high availability. Incoming traffic directed to the Kubernetes API passes through the AWS network load balancer (NLB).

Worker nodes run on Amazon EC2 instances located in a VPC, which is not managed by AWS. You can control and configure the VPC allocated for worker nodes. You can use a SSH to give your existing automation access or to provision worker nodes.

To restrict traffic between the control plane and a cluster, EKS provides Amazon VPC network policies. Only authorized clusters and accounts, defined by Kubernetes role-based access control (RBAC), can view or communicate with control plane components.

The following diagram illustrates the process of deploying a cluster on EKS - you instruct EKS to provision a cluster, cloud resources are provisioned in the background, and you can then connect to the Kubernetes cluster and run your workloads.

The AWS EKS architecture is composed of the following main components: clusters, nodes, and networking.

Clusters are made up of a control plane and EKS nodes.

The control plane runs on a dedicated set of EC2 instances in an Amazon-managed AWS account, and provides an API endpoint that can be accessed by your applications. It runs in single-tenant mode, and is responsible for controlling Kubernetes master nodes, such as the API Server and etcd.

Kubernetes worker nodes run on EC2 instances in your organization’s AWS account. They use the API endpoint to connect to the control plane, via a certificate file. A unique certificate is used for each cluster.

A “node” in EKS is an Amazon EC2 instance that Kubernetes pods can be scheduled on. Pods connect to the EKS cluster’s API endpoint. Nodes are organized into node groups. All the EC2 instances in a node group must have the same:

You can have several node groups in a cluster, each representing a different type of instance or instances with a different role.

Amazon EKS provides managed node groups with automated lifecycle management. This lets you automatically create, update, or shut down nodes with one operation. EKS uses Amazon’s latest Linux AMIs optimized for use with EKS. When you terminate nodes, EKS gracefully drains them to make sure there is no interruption of service. You can easily apply Kubernetes labels to an entire node group for management purposes.

Managed nodes are operated using EC2 Auto Scaling groups that are managed by the Amazon EKS service. You can define in which availability zones the groups should run. There are several ways to launch managed node groups, including the EKS console, eksctl, the Amazon CLI, Amazon API, or Amazon automation tools including CloudFormation.

You can use Amazon Fargate, a serverless container service, to run worker nodes without managing the underlying server infrastructure. Fargate bills you only for actual vCPUs and memory used. It provisions more computing resources according to what is actually needed by your cluster nodes.

The following diagram shows the network architecture of an EKS cluster: 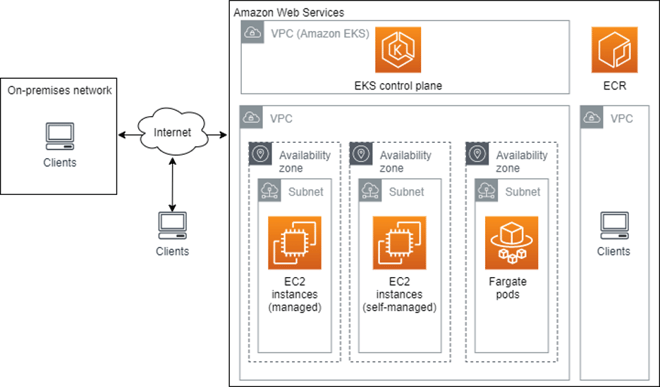 An Amazon EKS cluster operates in a Virtual Private Cloud (VPC), a secure private network within an Amazon data center. EKS deploys all resources to an existing subnet in a VPC you select, in one Amazon Region.

By default, EKS exposes a public endpoint. If you want additional security for your cluster, you can enable a private endpoint, and/or limit access to specific IP addresses. You can configure connectivity between on-premises networks or other VPCs and the VPC used by your EKS cluster.

Each EC2 instance used by the EKS cluster exists in one subnet. You have two options for defining networking: