The needs of enterprise application file services differ enormously, defined by workload, team, and required performance intensity. Dev/test production workloads will obviously diverge from the baseline requirements of MapReduce analytics and Oracle Databases. And, of course, not all applications are highly demanding, but…

We’ve decided to re-test the limits of a single cloud volume in NetApp Cloud Volumes Service for AWS. In so doing, we decided to make explicit our testing methodology alongside this explanation of its administration and outcomes, with a link to the testing parameters. This blog is the tool we’ve used to make our methods transparent.

Caveat emptor: testing methodology is everything when discussing limits and expectations. The testing didn’t target any particular application; instead, we chose to focus on the upper limits of both throughput and I/O, making every effort to ensure a full-stack evaluation.  When testing storage, we evaluated using realistic sizes for both the chosen dataset—the totality of data in a given file system—and the working set—the portion of the dataset that’s actively read from or written to.

Towards this end, the shown in this paper were achieved using a 1 tebibyte (TiB) working set, which caused I/O to traverse the entire storage subsystem, rather than rely upon data resident in storage memory. Oftentimes, application cache reads in server memory and, as such, a server cache miss will also likely result in a storage cache miss.

The following tables offer additional insight into the throughput detailed above. They indicate the service levels offered by NetApp Cloud Volumes Service, as well as the associated capacity and cost per month. In Cloud Volumes Service, users are able to dynamically increase or decrease service levels and allocated capacity as frequently as desired, meaning that the cost shown in the chart below will only be incurred if the capacity/service level is steadily maintained for an entire month. Thus, you can easily right size your performance at a fair price point.

Our study showed that working set sizes tend to have less of an impact on random workloads; thus, the following table illustrates data captured in the 1TiB test alone. A single volume can sustain up to ~470,000 random read IOPS or 130,000 random write IOPS (according to our test).

To achieve the above numbers, we used: 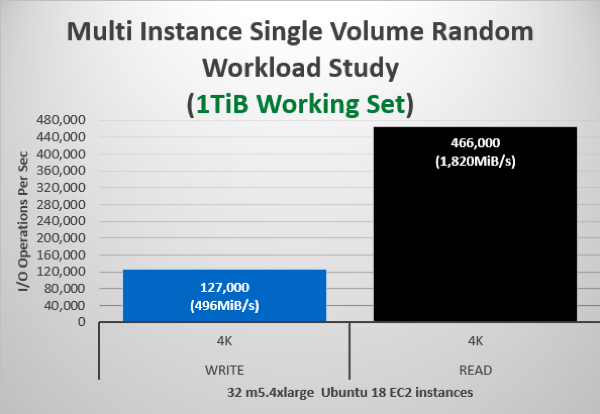 When it comes to scale-up performance, NetApp is quite happy to announce an exciting new development: though currently available only in the SUSE Linux Enterprise Server (SLES15), support for the nconnect NFS mount option has entered General Availability in the Linux 5.3 kernel.  We anticipate that this support will be backported into forthcoming RHEL distributions.  As documented by suse.com, the nconnect mount option requests multiple transport connections between the client and the storage IP. With this development in place, the I/O from even a single mount point is parallelizable across up to 16 network flows.

Please be aware: although the documentation (see item 4.6.2 in documentation for further information) calls out nconnect as a workaround for NFSv4 performance regressions, the new capability in Cloud Volumes Service works very well with NFSv3.

If the Instance is Part of a Cluster Placement Group

If the Instance is Not Part of a Cluster Placement Group

The FIO results captured against a single m5.24xlarge instance are presented in the charts below. The m5.24xlarge instance has about 25Gib/s of network bandwidth. Because the Cloud Volumes Service provides a single storage endpoint for each region, nconnect greatly increases the scalability of NFS for each individual EC2 instance.

A synthetic workload generator, often called a benchmarking tool, is a tool used to generate and measure storage performance. Simplicity and scalability are two primary reasons that we use a synthetic generator instead of setting up and testing the actual application. Recently, FIO has become the tool of choice for this set of benchmarks. Advantageously, FIO is easy to obtain, simple to use, viable for both Linux (scale up and scale out) and Windows (scale up only) and supports asynchronous I/O to mimic real world applications.

FIO makes testing, in other words, quite quick and easy: load extremes can be evaluated without too much hassle. For reference, the strengths that we look for in a good generator are (in a nutshell):

Beyond matching the needs of real-world modern applications, FIO’s use of asynchronous I/O allows the generator to avoid serialization. As such, it can better leverage compute cores on each virtual machine, which in turn drives the workload. 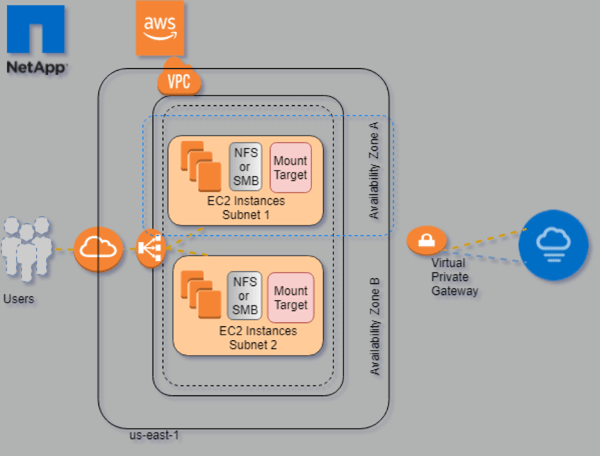 In our tests, we used the FIO load generator in addition to 32 m5.4xlarge virtual machines (for scale out) and 1 m5.24xlarge (for scale up). That allowed us to explore the amount of bandwidth available to a volume.

In each test, descending FIO iodepth values were selected {200,100,64,32,8,4,2,1} and the highest resulting figure selected for presentation.

Note: Each section below includes a table documenting the FIO parameters used in each scenario.

Use the following script to parse the results of FIO runs:

Want to Optimize Your Performance with NetApp Cloud Volumes Service?

Request a demo from a NetApp cloud specialist today.