AWS Quick Starts eliminate the manual effort required to deploy new stacks in AWS, stacks you might use for proof of concept efforts, or quickly deploying new production resources.

They differ from launching Amazon Machine Images directly by catering to customized and more intricate deployments that may involve systems from multiple vendors. Since they’re created by experts in AWS solutions architecture, Quick Starts always adhere to best practices for security, networking, and high availability.

NetApp is now introducing AWS Quick Starts for Cloud Volumes ONTAP to help get you started.

The first available Quick Start sets up a Microsoft SQL Server 2014 environment complete with separate iSCSI storage allocations for enterprise class of your data and logs.

In this article, we will take an in-depth look at using this Quick Start and the many benefits of using SQL Server together with Cloud Volumes ONTAP.

Setting up SQL Server with SAN storage requires installation and configuration of both the database server and the Cloud Volumes ONTAP system. On the storage side, this involves:

For the database server, a Windows Server machine is required to host SQL Server. The Quick Start uses a standard AWS Marketplace AMI of Windows Server 2012 R2 with SQL 2014 Standard.

This machine is then connected to the LUNs from the NetApp cloud-based SAN environment using iSCSI. The SQL Server can now use the data and log LUNs provided by the Cloud Volumes ONTAP system for placement of its respective database files.

NetApp’s new AWS Quick Start allows you accomplish all of this with just a few clicks, with the ability to configure Cloud Volumes ONTAP, SQL Server, and the networking setup along the way.

The Quick Start can either be deployed into a new VPC (Virtual Private Cloud) or an existing one. 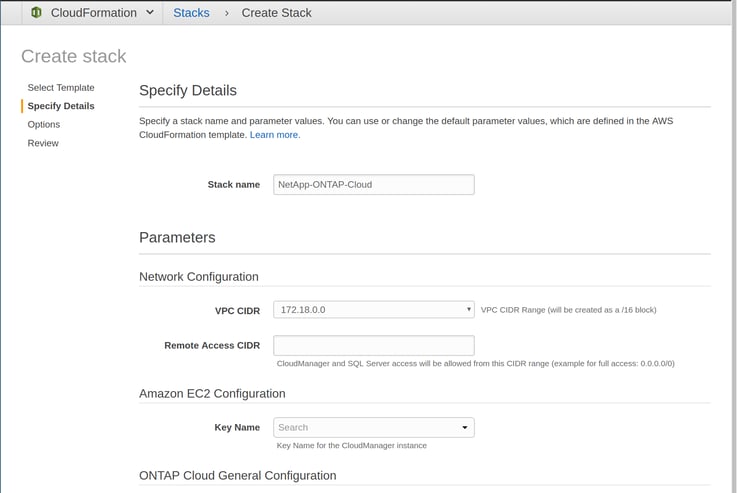 Quick Starts make use of AWS CloudFormation templates to define compute, storage, networking, and other resources that must be provisioned in order to create the environment. These templates can be fully customized, which means you can use them in CloudFormation Designer as a starting point for your own builds.

While the Quick Start is executing, you can monitor its progress through the Events tab in the AWS CloudFormation console.

After the Quick Start finishes launching, you can verify the installation by accessing the Windows Server 2012 instance via a remote desktop connection. Once there, you’ll see the two iSCSI LUNs from Cloud Volumes ONTAP mounted as additionally connected disks that you can now use with your SQL Server using the Microsoft client tools to start working with the database.

As another form of verification you can also connect to OnCommand Cloud Manager and review the installation of Cloud Volumes ONTAP from the main dashboard.

After logging into Cloud Manager, you’ll find the dashboard graphically displays your instance of Cloud Volumes ONTAP, allowing you to view configuration information and to perform various actions, such as volume creation.

You can also review the volumes that were created to support the database environment.

With your database storage now hosted on Cloud Volumes ONTAP, you gain the following advantages:

This helps to save a lot of time, whether you need to perform a proof of concept or are looking for a base build on that you can further customize.

Try the Quick Start for yourself with the free trial of Cloud Volumes ONTAP.