Backup and Archive 10 times faster at 1/10th the price: Why ONTAP backed up by NetApp is the obvious choice

With NetApp Cloud Backup for ONTAP you can simplify backup operations, run both with more agility and more reliability. How do we save you all that time and money? NetApp’s Cloud Backup Service.

Here’s a deeper look into the how this quantum leap in backup efficiency is achieved.

Backing up unchanged data is time consuming and wasteful

The amount of data that needs to be copied and moved from the data source to the backup destination varies significantly depending on the type of backup.

Periodic full backups increase the risk of missing a backup

Traditional NDMP-based backup solutions can only perform up to 9 consecutive incremental backups, after which they need to perform a full backup. Typically, these systems are configured to perform 5 daily backups followed by a full backup over the weekend.

Another unique advantage of using NetApp Cloud Backup is that after the one-time initial full backup, subsequent backups are incremental forever. This drastically minimizes the overall amount of data that needs to be transferred, contributing to its unmatched efficiency.

When there’s no need for periodic full backups, operations become much more efficient and the there is less chance of missing a backup window.

Another operational advantage is that Cloud Backup backs up and restores directly from source to destination while preserving ONTAP storage efficiencies end-to-end. This is not the case for traditional backup solutions which require a media server in between the source and destination. 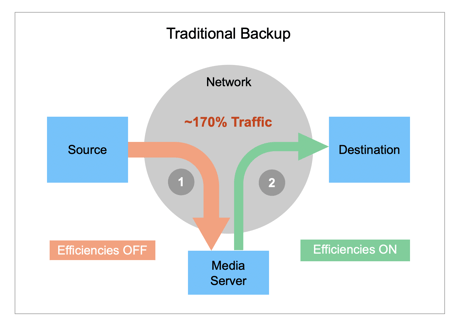 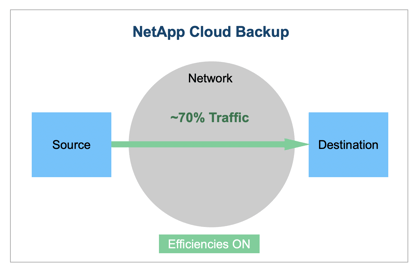 The direct backup from source to destination reduces network traffic to less than half compared to traditional solutions. This also removes the complexity of sizing and operating additional infrastructure components.

To give an idea of the how all the above advantages translate into operational efficiency, here’s a comparison of a traditional NDMP backup solution with Cloud Backup.NDMP backup vs. Cloud Backup

Let’s take 100TB of ONTAP NAS data that needs to be backed up daily.

Over the weekend, there is a full backup, which moves 100TB from the source to the media server and then 70TB (deduped and compressed) from the media server to the destination. For the daily backups, the traditional NDMP solution moves 5TB (5% of 100TB) to the media server, and then 3.5TB (5TB with 30% deduped and compressed) to the backup destination.
The total backup traffic a week for traditional backup is (5TB+3.5TB) x 5 + 100TB + 70TB = 212.5TB.
NetApp Cloud Backup moves 0.7TB (20% of 5% of the 100TB with 30% deduped and compressed) a day from the ONTAP source to the backup destination.
The total traffic per week is 4.9TB (0.7TB x 7).
Traditional backup sends 212.5TB traffic over the network in a week, compared to 4.9TB sent by NetApp Cloud Backup.
In this scenario, Cloud Backup consumes 96.7% less network bandwidth than a traditional NDMP backup solution.
Data is backed up significantly faster with less risk of failure and less chance of network congestion that could interfere with production traffic.

NetApp Cloud Backup is the native ONTAP backup service that lets you backup and restore data anywhere across the hybrid multicloud.

Note: Supported on ONTAP 9.7P5 and above.