Kubernetes vs. Nomad: Understanding the Tradeoffs

Kubernetes remains the standard-bearer in container orchestration. But there are other options available out there. Though not as popular as Kubernetes, HashiCorp’s Nomad is quickly catching up and is now becoming a serious disruptor in how containers are being orchestrated. How does this development affect your Kubernetes storage layer?

In this article we’ll take a side-by-side look at Kubernetes vs. Nomad, delving into the various features, benefits, use cases, and challenges of both.

Jump down using the links below to read where we cover:

The Basics of Container Orchestration

Containers are ephemeral by nature: they exist to run a single process, and then they are terminated. These are also built to be immutable, meaning that application upgrades require those containers to be replaced, rather than updated. Since they are virtual software packages intended to run on any platform, containers don’t have native access to computing resources such as storage or networking.

Container orchestration tools were developed to provide frameworks for managing microservices at scale through container lifecycle management procedures. These platforms eliminate the manual processes involved in ensuring containers are functional in production, such as:

In the modern cloud-native landscape, Kubernetes and Nomad are two popular container orchestration tools. Now let’s have a closer look at how these two similar services compare.

On account of the list of features and benefits to schedule and deploy containerized applications on different clusters of physical or virtual machines, Kubernetes has quickly become the de facto standard container orchestration platform for organizations leveraging the modern DevOps and CI/CD frameworks.

Some Kubernetes features include:

At a high level, the Kubernetes architecture can be likened to a layered system with the top layers abstracting complexities of the underlying layers. This architecture consists of components that work together to deliver various features and functions we described above.

The key components of the Kubernetes cluster architecture include:

HashiCorp’s Nomad is a simple, flexible workload orchestration tool that facilitates the deployment, management, and scaling of different workload types across multiple regions and cloud platforms. Nomad provides a common pool of infrastructure from multiple platforms—on premises and in the cloud—to be shared between various applications.

Instead of being attributed as a specialized container orchestration and automation platform, Nomad focuses on container scheduling and cluster management through optimized resource utilization with bin-packing.

Some features of Nomad include:

Nomad clusters leverage Consul for configuring and discovering cluster services. A Nomad cluster is composed of various servers (between three and seven) connecting with client agents through remote procedure calls. The cluster infrastructure is divided into regions that manage one or more availability zones or data centers, where regions are loosely coupled, and communicate with each other using Gossip Protocol Architecture. 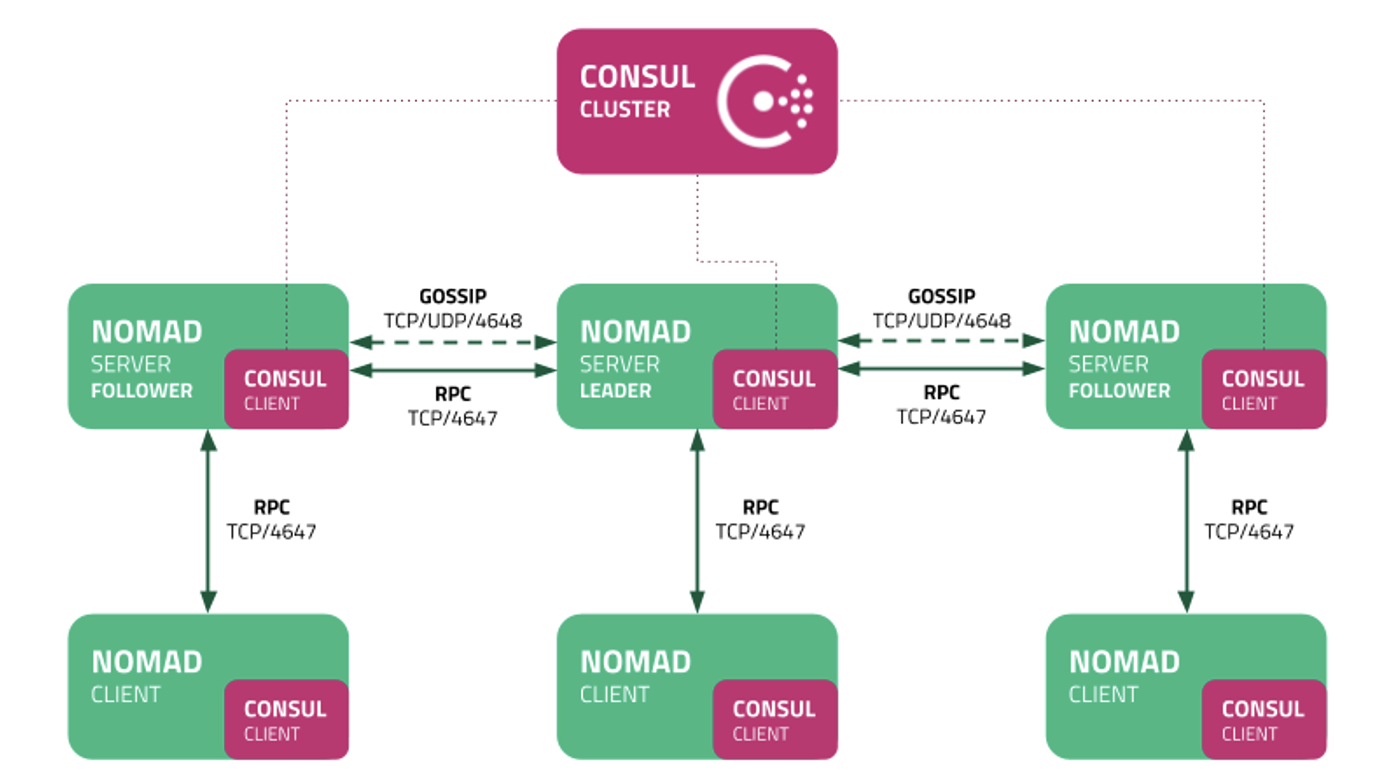 Kubernetes is an end-to-end container orchestration platform that relies on a dynamic ecosystem of various loosely-coupled components. Nomad is architecturally much simpler, though offers the same features a robust orchestrator offers. The two platforms share a number of features and differ in several ways. Let us take a closer look.

Kubernetes and Nomad are both open-source tools that are built for container orchestration and to support similar use cases. As a result, both carry a number of common features:

By leveraging a preset-function-based ranking system, both Nomad and Kubernetes automatically lookup suitable hosts to run an application.

Both orchestration platforms include various tools and mechanisms to restart applications and recover data in case of a failure.

To manage large cluster deployments, both Nomad and Kubernetes support rolling updates out of the box.

Though both platforms are meant for container orchestration, Nomad and Kubernetes have a few fundamental differences, including:

Flexible Workload Support
Kubernetes is built to orchestrate containers hosting workloads, while Nomad is considered more of a workload scheduler that can be used to manage the deployment of both legacy and containerized applications, and scheduling batch jobs.

Scalability
Both platforms are built for autoscaling in large deployments, however Nomad is considered favorably to scale larger clusters than Kubernetes. While Kubernetes is built to support clusters with up to 5,000 nodes orchestrating a maximum of 300,000 containers, Nomad can scale clusters exceeding 10,000 nodes in production, and surpassed the benchmark for the two million container challenge.

Deployment Consistency
Kubernetes offers different deployment and management environments to make it easier for organizations to perform development and testing before pushing apps to deployment. These may create inconsistencies in configuration and capabilities when going live. Nomad uses a single, portable library that can be deployed on any environment to provide the same user experience across different platforms.

Which Should You Use?

Both Nomad and Kubernetes offer different, yet excellent platforms for operationalizing containerized workloads. Due to their differences in form and function, there are certain use cases when one offers more than the other.

Nomad is a general purpose orchestrating platform that can be used to manage clusters of legacy applications, traditional batch jobs, or even supplement an existing Kubernetes ecosystem by supporting a multi-orchestrator framework. The platform also is designed to be platform-agnostic by supporting multiple environments, including Windows. Its simplicity also makes it ideal for organizations just getting started with container orchestration.

Kubernetes, on the other hand, is a mature framework with comprehensive container orchestration services and tools integrations that is developed with a primary focus to support Linux-based containers. The platform is considered perfect for organizations already running applications on Linux containers and have the right skillset to manage its complex ecosystem.

Both platforms, while built to orchestrate containers in clusters, have different features and functions that support different use-cases. As with any other form of technology, it is difficult to predict what comes next, but it will be interesting to see how the two platforms fare in the years to come.

For more details, see how Cloud Volumes ONTAP is being used in these companies’ Kubernetes deployments.

●     Is Nomad better than Kubernetes?

The answer to this depends on a number of factors and the required use case. While Nomad is platform-agnostic and more flexible, Kubernetes offers support for only specific platform types and has been inherently built to run Linux containers. While Kubernetes is specifically a cluster management platform, Nomad is known to be a more general-purpose tool rather than focusing on orchestration.

Due to the importance of container orchestrators in cloud-native clusters, it is highly recommended that the list of features, and the pros and cons of both platforms are appropriately weighed before choosing one of them.

●     Why use Nomad instead of Kubernetes?

Nomad is a toolkit designed specifically for building highly scalable clusters. In addition to being easy to learn and understand, Nomad makes it possible to run stateful workloads without having to worry about managing complex configuration files.

Nomad also has certain features that may appeal to those who want to run database clusters. For instance, Nomad supports multi-master replication between nodes which makes it easier to recover after node failures. In addition, Nomad offers several advanced scheduling options including priority queues and weighted randomization.

Nomad is not based on Kubernetes technology. Nomad is a stand-alone platform by HashiCorp that acts as an alternative to Kubernetes. Both Kubernetes and Nomad are built for container orchestration and offer various features that support specific use cases.