How Does VMware Run Kubernetes?

Kubernetes is the most popular open-source platform for managing container workloads, with a large community and tools ecosystem. It supports declarative configuration, powerful automation, and has a large and rapidly growing ecosystem.

For VMware administrators, Kubernetes is a new way to deploy applications and manage their lifecycle, which is gradually replacing bare metal virtualization.

VMware is strongly focused on integrating its platforms and technologies with Kubernetes. There are two main flavors for running Kubernetes on VMware:

A brief introduction to the history of the various application delivery methods will help you understand the relevance of Kubernetes for modern VMware operations.

Traditionally, applications and workloads were deployed directly to physical servers. This type of deployment is often inflexible, difficult to manage, and wastes resources because applications are limited to running on one system, regardless of the resources they actually utilize.

VMware ESXi adds a hypervisor abstraction layer that creates virtual machines, which emulate the functionality of standard physical servers. Each virtual machine is assigned its own resources and operating system, so you can separate the underlying hardware resources from the workloads running on them.

Containers are gradually replacing virtual machines as the mechanism of choice for deploying dev/test environments and modern cloud-based applications. VMware has integrated its infrastructure with Kubernetes, to let you run containers alongside traditional virtual machines, and manage them using familiar VMware technology.

In 2019 VMware announced Project Pacific, which was intended to integrate VMware vSphere with Kubernetes. From vSphere 7, the virtualization platform fully supports Kubernetes. It enables seamless management of clusters and containers using existing tools familiar to vSphere developers and administrators.

vSphere administrators can use namespaces (used in Kubernetes for policy and resource management) to give developers control over security, resource consumption, and network functions for their Kubernetes clusters.

How Does vSphere with Kubernetes Work?

vSphere introduces the Kubernetes API for Kubernetes developers, which provides a cloud service experience similar to that of a public cloud, with a control plane based on the namespace entity, which is managed by administrators. This architecture enables orchestration and management or workloads in a consistent manner, regardless of their shape and form—container, virtual machine, or application.

This makes it possible to host containers directly on the hypervisor without a separate instance of the Linux operating system. To enable this, vSphere has a new ESXi container runtime called CRX. From the perspective of the Kubernetes system, this is visible as a vSphere Pod Service.

Supervisor
The Supervisor is a special type of Kubernetes cluster that uses ESXi as a worker node instead of Linux. For this purpose, the Spherelet agent is integrated directly into the ESXi hypervisor. The Spherelet does not run on virtual machines, but directly on ESXi via vSphere Pods. Pods can utilize the ESXi hypervisor’s security, performance and high availability properties. 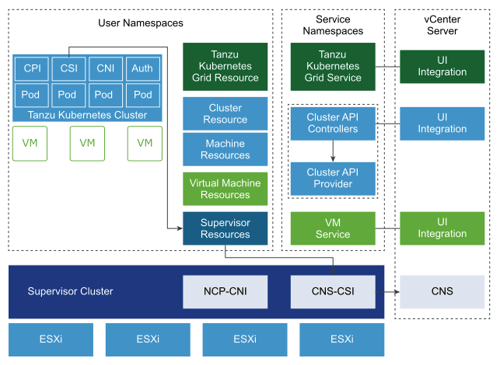 A Tanzu Kubernetes cluster is composed of four primary components: