As a featured sponsor of the September API: World Hackathon event in San Francisco, NetApp hosted a Hackathon challenge and provided managed storage infrastructure for developer teams competing for recognition and prizes.

Three innovative developer teams rose to the top by creating applications that took advantage of high availability storage, cloud resource efficiency, application consistency and data security and were awarded for their efforts.

Campus NubThe application supplies all relevant forms and documents, enabling sellers to sell independently and reliably without the need for a realtor. Moving beyond simple storage, TurboEstate deployed a continuous integration system with Jenkins on top of the NetApp Cloud Volumes ONTAP storage.

The TurboEstate team was able to demonstrate flexclone technology to stand up an independent test environment, greatly simplifying and streamlining the dev/test environment. 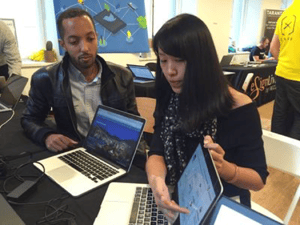 Our second place went to Aji John, Kevin Xu, Angela Xu and Ivana He. They created Campus Nub, an application that acts as a new student’s personal guide around a university campus.

Campus Nub makes it easy to access and search a university’s class schedule and enables students to find compatible study and research groups based on their interests and personality.

Campus Nub used Cloud Volumes ONTAP to host their NoSQL MongoDB database and laid the foundation to clone the database across regions to achieve localization and faster content delivery.

NetApp’s third place Challenge winners were Amir Youssefi and Solomon Wu, who created Cloud Jump. They utilized Cloud Volumes ONTAP to move a company’s Cluster of Machines (Hadoop, Spark, others) from one cloud provider zone to another zone, or from on-premise to cloud.

Many innovative and exciting applications utilizing Cloud Volumes ONTAP were developed over the course of the weekend hackathon, and naming the top three was a difficult choice for the NetApp judging panel.

We were greatly impressed by all the developers at API:World Hackathon and look forward to the next opportunity to interact with these enthusiastic architects and coders.