Azure tiers storage between different classes of object-based Azure Blob storage. But what if you want to tier data from pricier Azure disk storage to more cost-effective Azure tiers?

While there is no Azure-native service to tier data from block storage to the object storage Azure tiers in Azure Blob, it is possible with Cloud Volumes ONTAP's data tiering feature.

This post takes a closer look at how Cloud Volumes ONTAP data tiering moves data to the most optimal Azure tiers seamlessly and automatically and the huge cost benefits this provides.


What Is Storage Tiering?

Storage tiering is the ability to keep data in different pools of storage as needed. Since different storage volume types have different characteristics, such as latency, throughput, and access charges, they also are priced differently. A capacity tier is used to house data that is not needed for frequent use at a lower cost, and a performance tier for all the data in active use.

In Azure, the capacity tier would be on Azure Blob and the performance tier on Azure disks. Automated storage tiering in Cloud Volumes ONTAP provides a huge benefit by allowing users to automatically and seamlessly move data between the capacity and performance tiers as needed, depending on the data frequency usage, something the native cloud providers can’t do.

While storing data in the Azure cloud, storage is charged based on usage. Hence it is sensible to move infrequently-accessed data—such as snapshot data, DR environments, and backup copies of data—to a cheaper storage tier to improve cloud storage costs. Cloud Volumes ONTAP eases this task with the new data tiering feature, where infrequently-accessed data, i.e. the “cold” data, is automatically and seamlessly tiered to an Azure blob which acts as the capacity tier, and this can be done with minimal configuration overhead. Data frequently accessed by applications, or the “hot” data, remains in the performance tier, which is located either on the Premium SSD managed disks or Standard HDD managed disks service in Azure. 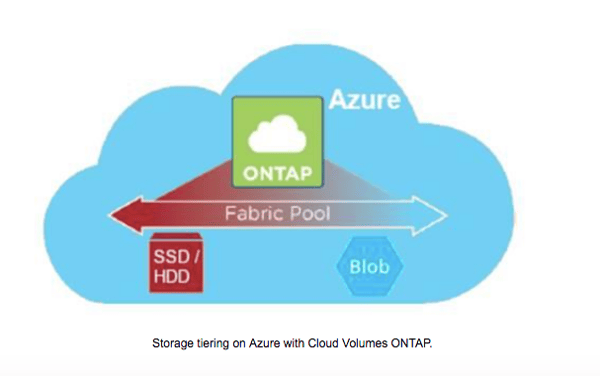 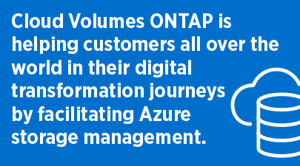 The tiering is done automatically based on the data usage and hence there are no additional monitoring or configuration overheads. By leveraging cost-effective storage, the monthly storage consumption bill can be reduced considerably. For example, according to Azure storage pricing, storing 1 TB of data in Azure cool tier with minimal read/write will cost approximately $18/month. However, the same data when stored in a Premium SSD storage in the performance tier can cost you approximately $77/month. The annual cost savings in this example is $216, which translates to approximately 75% cost savings with no overhead when compared to the cost of Premium tier storage.

Snapshot only: Snapshots are online, point-in-time, read-only copies of the data in a storage volume. If the Snapshot only tiering policy is selected, the cold snapshots are tiered to the capacity tier after a cooling period of approximately 2 days. The performance tier is thus freed up.

Auto-tiering: If data is not accessed for 30 days or another period as specified by the user, it is automatically tiered to Azure blob storage. If the data is again accessed after moving to the capacity tier, it will be automatically and seamlessly tiered back to the performance tier, i.e. Premium SSD or Standard HDD managed storage. Cloud Volumes ONTAP has the intelligence to detect sequential data reads such as antivirus scans or file indexing, and in such cases, data is not tiered back to performance tier.

Disaster Recovery: With volumes replicated for the purposes of DR, the destination volume is created by default in the capacity tier. If this replicated volume is later accessed for say recovery operations, the data is moved to the performance tier as just as when it is accessed normally.

None: In this case, data remains in the performance tier and is not tiered automatically.

Note: Both snapshot only and auto-tiering policies kick in only when the capacity reached an aggregate of 50%.

Storage tiering is supported with Cloud Volumes ONTAP starting with version 9.4. No additional licenses are required. The configuration steps for tiered storage architecture can be summarized as follows:

It is important to ensure connectivity between the capacity and performance tiers to enable Cloud Volumes ONTAP storage tiering. However, if Cloud Manager is already configured with the required permissions in Azure, this requirement will be taken care of automatically. Cloud Manager will also configure the required VNET service end-point necessary for tiering to work.

Cloud Volumes ONTAP is helping customers all over the world in their digital transformation journeys by facilitating Azure storage management and empowering storage economy. The success story of Galatz Radio is worth taking a look at, as they achieved as much as 70% savings in data center and storage costs by leveraging Cloud Volumes ONTAP for Azure. The new tiered storage solutions in Cloud Volumes ONTAP further enhances the savings potential by leveraging low cost storage for infrequently-accessed data. If you’re also working in the AWS cloud, find out about storage tiering in AWS here.

Organizations planning to use Cloud Volumes ONTAP for enterprise use cases such as backup, DR, as well as any other workloads would greatly benefit from automated storage tiering with Azure.