In this blog we’ll explore the automated storage tiering feature of Cloud Volumes ONTAP with AWS and how it can allow enterprise customers efficiently and cost-effectively store their active, backup, or DR data.

What is Data Tiering?

Different types of cloud storage perform differently, and charges are based accordingly. Automatic data tiering helps optimize usage and costs by moving data automatically between storage tiers in the cloud based on the data’s usage pattern. Data that is frequently accessed, or “hot,” is placed in a low-latency performance tier while data that is less-frequently accessed, or “cold,” is tiered to a low-cost capacity tier.

The performance tier on Amazon EBS is suitable for storing data actively used by applications with frequent read/write requirements that could benefit from the higher IOPS. Possible use cases are databases such as SQL and MySQL or business applications hosted in AWS.

Amazon S3 (Object Storage): The capacity tier on Amazon S3 is suitable for storing less-frequently accessed, large data sets such as backup and archival copies, snapshot data, AWS disaster recovery data, etc. Storing large amounts of such data in a performance tier is simply not economical due to the higher storage charges. It’s also impractical, because these data types typically do not need that level of performance.

Cloud Volumes ONTAP uses Amazon S3 Standard storage as the default capacity tier. This default option can be changed to use Standard-Infrequent Access (Standard-IA) or One Zone-Infrequent Access (One Zone-IA) storage, lowering storage costs for infrequently used data even further.

The Standard-IA class targets infrequently-accessed data with faster retrieval speeds but has a lower per-GB storage cost. It is priced as $0.0125 per GB of stored data. In terms of native AWS S3 availability, it uses multiple Availability Zones to ensure durability of the data. One Zone-IA also targets data that is not accessed frequently, however that data is only stored within one AZ. It is an ideal low-cost tiered storage option with storage charges as low as $0.01 per GB, though it offers less protection. Should an AZ go down, your data will go with it. Though
Amazon S3 storage costs for Standard-IA and One Zone-IA are lower, the data retrieval charges for these storage tiers ($0.01 per 1,000 requests) are higher compared to Amazon S3 Standard ($0.005 per 1,000 requests).

Storing 5 TB of data in US East (N. Virginia) in the performance tier using General Purpose SSD could incur an annual charge of $6144. However, storing the same data in the capacity tier using Standard-IA could cost you only $768 annually, not including access charges. 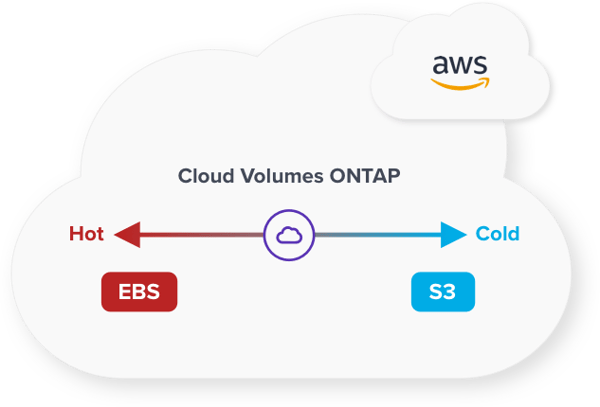 Let’s take a look at each of the data tiering policies Cloud Volumes ONTAP offers.

Auto: The auto-tiering policy can be configured to move data to the Amazon S3 capacity tier after a default cooling period of 31 days, but which can be configured. The cold data includes snapshots as well as user active data. If the data is accessed, Cloud Volumes ONTAP marks the data as hot and moves it back to performance tier, except for sequential reads such as those associated with index and antivirus scans.

DR/Backup: This tiering option is how Cloud Volumes ONTAP helps companies save on DR, backup, or other secondary copies. When creating a replica volume in Cloud Volumes ONTAP for DR or backup purposes, the data will be created in the capacity tier by default. On activating the DR volume or restoring a backup volume in a recovery operation, the data will automatically be moved to the performance tier on Amazon EBS for immediate use.

Snapshot Only: Snapshots are point in time copies of data that will help quick recovery in any failure DR scenarios. When using the Snapshot Only tiering option, snapshot data associated with a Cloud Volumes ONTAP volume is automatically tiered to the Amazon S3 capacity tier after a cooling period of two days, as long as the snapshot is not linked to an active file system. If at any time the snapshots are read, they are moved back to performance tier automatically.
Note: With this option, tiering will start when the aggregate reaches 50% capacity.

Users don’t need to create an additional S3 bucket for the capacity tier as that will be taken care of automatically by Cloud Manager, the single-pane user interface and automation console for Cloud Volumes ONTAP.