With a rapid rise of malicious cyber security threats such as ransomware, ensuring the security of data stored in the cloud is of paramount importance for any organization.

Azure provides various out-of-the-box security options that can be leveraged by customers to ensure such data security. Encryption of data at rest is one of the most important options available here which can be leveraged to encrypt Azure Virtual Machine data, storage account data, and various other at-rest data sources such as databases in Azure.

Jump down below to read about:

Data Encryption in Azure: What Is Azure Key Vault and More

It’s a widespread security requirement for data at rest in a storage environment to be encrypted. Encryption at rest is often mandated by regulatory compliance requirements that many enterprise organizations are legally required to follow. In addition, encryption at rest also provides an additional layer to maintain the defense-in-depth approach to information security.

It is important to understand some of the key components involved in providing the at-rest data encryption available in Azure.

Azure at rest data encryption supports two main encryption models where customers have the choice of managing the encryption and encryption keys themselves or letting Azure manage it in full.

Let’s take a closer look at these options.

Server-side encryption (SSE) with customer-managed keys (CMK) in Azure key vault has become a very popular choice with many enterprise customers, so we will take a closer look at this model below.

Performing server-side encryption with Azure Key Vault arguably provides the most balanced option for many Azure customers who can leverage the Azure key vault to store and maintain encryption keys, while providing the flexibility to bring their own root encryption keys. 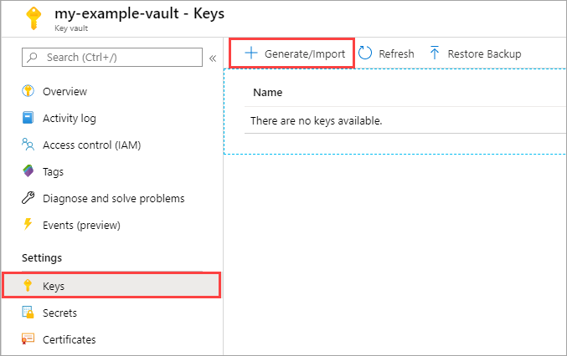 As shown in the screenshot above, customers can either generate or bring their own RSA 2048-bit root KEK onto Azure key vault (AKA: Bring your Own Key) and Resource providers such as the storage will then create and use the DEK using this root KEK. The DEK can be stored closer to the data itself for easier and quicker access to data as required.

Server-side encryption with Azure Key Vault supports automatic key rotation where new root keys will trigger an automatic update of all services, typically within an hour. Customers can also enable additional key management safety measures such as soft delete (holds deleted keys for a certain period) and purge protection (prevents permanent deletion of keys for a specified period) as needed via Key Vault.

Among all the Azure services leveraging encryption, one of the biggest consumers of Azure server-side encryption is the Azure Disk Storage, in order to protect the Azure Virtual Machine data. It automatically encrypts data stored on Azure managed disks by default, using powerful 256-bit AES encryption with FIPS 140-2 compliance. 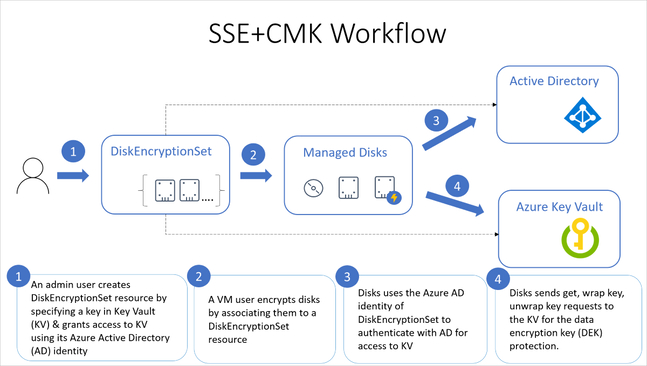 Server-side encryption with Azure Key Vault can also be used for various Azure services. These services include:

While utilizing server-side encryption with Azure Key vault provides various advantages as described above, customers must also consider some of the following:

NetApp Cloud Volumes ONTAP is an enterprise grade, cloud-native data storage and data management solution that is available on Azure (And all other major cloud platforms). Amongst various enterprise data management features such as high availability, storage efficiency, and multiprotocol file access, Cloud Volumes ONTAP also provides a number of enterprise security and compliance capabilities to safeguard customer data on Azure, including:

These capabilities can be easily coupled with the native features of Azure encrypted storage to provide additional security for highly sensitive enterprise data.

●    Does Azure encrypt data at rest?

Azure offers two types of encryption for data at rest: client-side and server-side encryption. There are a number of different services that can leverage either of these two models.

●    What encryption does Azure use?

●    What is Azure storage service encryption?

The various Azure storage services can leverage the encryption capabilities offered by Azure. Many organizations have legal as well as operational requirements to ensure that their data is secure, and encryption is a keyway to ensure that.