Google Cloud Migration: Why and How to Make the Move

Google Cloud Migration: Why and How to Make the Move
Cloud Storage Transfer Service for Google Cloud
GCP Migration with Cloud Volumes ONTAP

Google is one of the giants of the Internet today, and while it is still in third place when it comes to cloud hosting services, Google Cloud's Infrastructure as a Service (IaaS) offering, offers numerous advantages for individuals and enterprises alike. Cloud migration can be a difficult undertaking, so it is important to understand the benefits (and potential drawbacks) of each cloud environment before you attempt to make the move.

In this post, we’ll examine the advantages of Google Cloud and discuss the process of migrating to Google from an on-premise data center. We’ll provide some tips to help you build your migration strategy and show how NetApp Cloud Volumes ONTAP can help you implement it.

What Is Google Cloud?

Google Cloud Platform (GCP) is Google’s public cloud service, which competes with Amazon Web Services and Azure (see our articles about Google Cloud vs AWS and Azure vs Google Cloud). GCP supports virtual machines like its competitors, but has a special focus on modern, containerized workloads and the ability to efficiently run machines learning models.

While Google is a smaller player in the cloud services market, it is rapidly catching up, and is perceived to have several important advantages:

When planning your migration strategy to GCP, Google advises you follow these five steps. 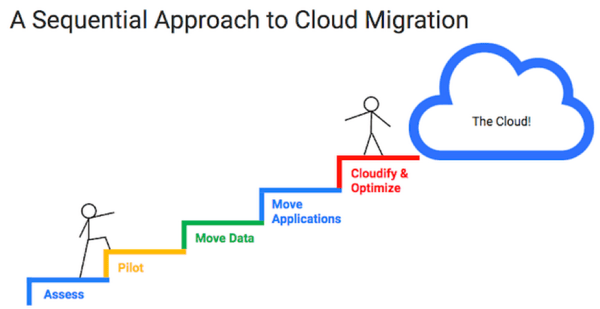 Evaluate applications and workloads’ suitability to the Google Cloud. Primary considerations include:

Divide your apps into three categories:

Take one or two applications, preferably from the “easy to move” bucket, and migrate them. Run the apps in production for a while and measure performance. Understand the licensing requirements if you scale up your Google Cloud workloads or add more applications, and always plan for a rollback to on-premise or another cloud in case migration fails.

Google advises moving all your data to the cloud first, then moving the rest of your applications. Consider the storage tiers offered by Google Cloud Storage (Standard, NearLine Storage and ColdLine Storage), SSDs vs. regular hard disks, and database services like Google Cloud SQL, Datastore and Bigtable. Plan how you’ll physically move the data—data transfer, sending an offline disk to the Google data center, streaming to persistent disks, etc.

If you can, perform a direct “lift and shift” of your applications to Google Cloud. For example, by creating a local virtual machine representing your workload and importing it as a Google VM, or backing up your app to GCP and thus automatically creating a cloud copy. If a simple option is not possible, consider rebuilding applications in the cloud with a combination of custom VMs and GCP infrastructure services.

Now that applications are running in the cloud, consider ways to make them better:

Automatic Migration from an On-Premises Data Center to Google Cloud

While there are many paths for migrating to Google Cloud, a common path is to take local VMs managed by VMware vSphere and move them as-is to GCP. This path is fully automated by Google Cloud Migrate for Compute Engine.

Here are the general steps for moving your vSphere workloads automatically into Google Cloud Platform:

In particular, Cloud Volumes ONTAP assists with cloud migration. NetApp’s data replication tools SnapMirror® and Cloud Sync service will get your data to the cloud.

Google Cloud migration is a complex endeavour. Before you start your migration, you will need to compare options provided by other cloud vendors, and understand comparative pricing, to validate your migration strategy. During the migration project, you should familiarize yourself with technical issues like transferring data from on-premises or other clouds to Google Cloud. Read more about these topics in our articles below.

If you’re considering either Google Cloud or AWS for your cloud workloads, get a quick review of the differences between the platforms. Learn about storage and compute services provided by the two cloud providers, their strengths and weaknesses, and how they compare on pricing.

When comparing Google Cloud to AWS, recognize that because the service offerings and price structures are very different, you may not be making a fair comparison. Learn about the different pricing models and service structures of the two public clouds, and which services are really comparable on price.

Before selecting Azure or Google Cloud for your deployment, learn about the differences between Google and Microsoft’s public cloud offering. Understand the storage and compute options offered by each of these clouds, pricing, and pros and cons.

Read more in: Azure vs Google Cloud: How They Compare

AWS vs Azure vs Google Cloud

If you’re planning to select one of the big three public cloud providers, get a review of all three offerings, the comparative services provided by each, and where the advantages lie. Each of the three clouds could be an excellent choice, depending on the specific needs of your architecture.

Read more in: AWS vs Azure vs Google Cloud: Choosing the Best Cloud Provider for You

Google emphasizes pricing as a competitive differentiator, aiming to offer pricing that is lower, friendlier, and more intuitive. Cost is a key parameter to consider if you are considering migrating to Google Cloud. Learn about Google Cloud’s price philosophy, what is included in the free tier, as well as tools and best practices for managing costs.

Migrating workloads to Google Cloud? A central part of the effort will be transferring your data to Google Cloud Storage. Learn considerations and best practices that can help you reduce costs and minimize errors.

These Google Cloud case studies include major enterprises from verticals such as finance, healthcare, and banking.

Migrating to Google Cloud has become an option that more and more companies are taking advantage of to advance their business interests and gain the latest in cloud-based services. Cloud Volumes ONTAP makes those migrations even easier.

In this post we introduce all of the benefits to migrating to GCP with the help of Cloud Volumes ONTAP, including seamless data replication, cost-saving storage efficiencies, and next-level data hybridity.