In this post, we’ll explain how AWS Backup works, its use cases and pricing, and show how NetApp Cloud Volumes ONTAP can help you optimize and improve AWS backups.

This is part of an extensive series of guides about data breaches.


What is AWS Backup?

For years, AWS has offered tools for each of these scenarios. For example, you can automate EBS snapshots to backup local storage for an EC2 instance, or use AWS Storage Gateway to backup data from local storage devices to Amazon S3.

However, in 2019 Amazon took its backup offering one step further, launching a dedicated service named AWS Backup, which lets you automate and centrally manage backups across the enterprise.

AWS Backup supports both of the scenarios above—it lets you backup data from Amazon EFS, DynamoDB, RDS or EBS, and also from on-premise resources via the AWS Storage Gateway.

AWS Backup doesn’t replace the previous backup technologies offered by AWS. It is a central management interface that brings those technologies together, letting you orchestrate and schedule backups easily in one place.

How Does the New AWS Backup Service Work?

AWS Backup is built around the following concepts:

AWS Backup lets you define a new backup using the AWS Console, or define one programmatically using a JSON file.

How to Define a Backup Using the AWS Console

Follow the process below to create a new backup plan.

1. In AWS, click Create Backup Plan and select Build a New Plan.
2. Select Create a new backup rule—below is an example of a backup that runs daily, moves data to cold storage after a month, and deletes it after 6 months.

3. Click Create Plan, and then view your plan and click Assign Resources to define what should be backed up using this rule. You need to define IAM roles to AWS Backup with access to each of the resources you would like to back up.
4. Select which resources you want to backup as part of the backup plan. Below is an example in which we backup an EFS folder, a DynamoDB table, an EBS volume, and all data resources defined by a tag value. 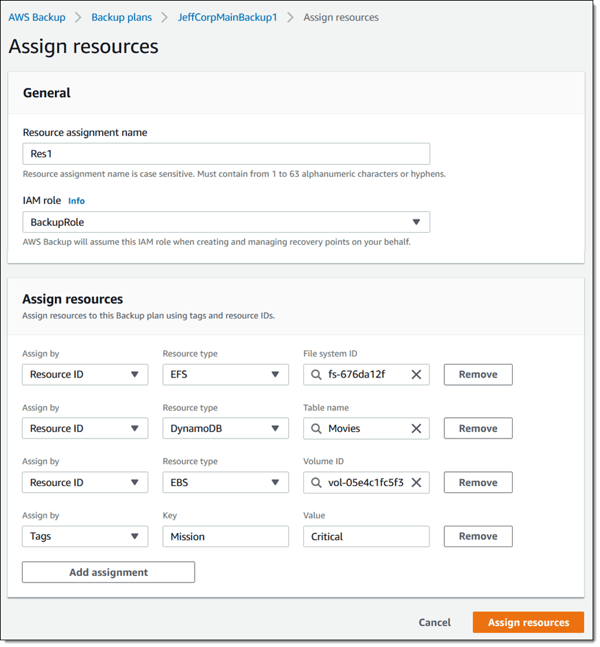 5. Go to the AWS Backup Dashboard and monitor your new backup job. You can see which backup jobs and restore jobs have been running and their status.

We only covered the most basic functionality of AWS Backup, see the official documentation for more details.

Below are a few common use cases for AWS Backup, and the underlying Amazon backup technologies it manages.

Hybrid Cloud Backup
You can use the AWS Storage Gateway to integrate local storage resources with the Amazon cloud. When you restore from backup, data is automatically copied from Amazon back to your on-premise storage devices. Data is stored in one of the Amazon S3 storage tiers, depending on how quickly or frequently you need to access the data.

AWS Backup lets you automate this process, creating a backup plan that defines a schedule and frequency for backups from on-premises storage to S3.

AWS Backup lets you automate all these backups in one place by defining one or more backup plans, and specifying the databases or group of databases you need to backup. You no longer have to define specific backup settings in RDS or DynamoDB, or schedule EBS snapshots—this is done automatically by AWS backup.

Data Lifecycle Management
Amazon S3 provides several storage tiers, which allow you to move data that is used less frequently to cost-effective cold storage. Within S3, you can configure lifecycle policies that automatically move data sets to a cheaper storage class, or delete them altogether, based on predefined criteria.

AWS Backup lets you do this centrally as part of a backup plan. When you define backups, you can specify what happens to your backups after several weeks, months or years—you can automatically define an S3 lifecycle policy to move the data to cold storage or delete it when it is no longer needed.

If you backup an AWS-based data resource, pricing is as follows (prices are for US East Region, and may change from time to time, see the official pricing page):

The above prices are for warm storage. AWS Backup only supports cold storage for Amazon EFS backups, at a significantly reduced price of $0.01 per GB/month.

Restoring backups is free for EBS, RDS, and Storage Gateway. The following services incur a cost for restoring backups (pricing is for US East Region and may change from time to time):

NetApp understands ONTAP better than anyone else, which is why the best backup solution for ONTAP systems is NetApp Cloud Backup. Designed by NetApp specifically for ONTAP, Cloud Backup automatically creates block-level incremental forever backups. These copies are stored in object format and preserve all ONTAP’s storage efficiencies. Your backups are 100X faster to create, easy to restore, and much more reliable than with any other solution.

Cloud Backup simplifies the entire backup process. It’s intuitive, quick to deploy, and managed from the same console as the rest of the NetApp cloud ecosystem. Whether you’re looking for a less expensive way to store your backups, a faster, more capable technology than NDMP, or an easy way to enable a 3-2-1 strategy, Cloud Backup offers the best backup solution for ONTAP.

AWS backup is a substantial expense and a major operational burden for many organizations. Read our additional articles below to learn how to control your costs, automate backups, and leverage NetApp technologies to execute hybrid cloud strategies and gain major storage efficiencies.

AWS Backup Pricing
AWS backup pricing is based on the amount of storage your backups use, and the volume of data you restore when needed.

Data storage is priced per GB-month for backup storage, with two storage tiers for backup data: warm storage and cold storage. In addition, Amazon charges per GB transferred out of storage, with prices depending on the transfer destination.

Automating Your Disk Backup and Data Archive Part 1: AWS Database Backup with AWS Snapshots
AWS snapshots play an important role in data protection for many workloads, including AWS database backups. These snapshots can also be useful in a wide range of issues which include: creating development and testing environments; fixing corrupted data; solving user errors; and recovering from cyber attacks.

Whether your architecture is hybrid or cloud-only, there are different ways to ensure your AWS database backup is in place and recoverable. For example, you can use both file-based and snapshot-based backups and store backups redundantly across Regions and Availability Zones to maximize availability.

Learn about these and additional options to back up your databases on AWS.

Cloud Volumes ONTAP snapshots created using SnapMirror® data replication. SnapMirror is NetApp’s enterprise data replication technology, which can rapidly synchronize large volumes of data for use cases such as disaster recovery and cloud migration. After the initial snapshot, SnapMirror only copied blocks that have changed, making it fast and efficient.

Learn how to use SnapMirror to improve database backup performance, reduce storage space and substantially save on backup costs.

Cloud Backup Services: NetApp’s Backup-as-a-Service for Cloud Volumes ONTAP
Backing up mission-critical data is a crucial step in protecting your cloud-based operations. Traditionally, this task was performed by storage admins using the native cloud backup services the major cloud providers offer. However, there is a new cloud backup service available that makes the backup process significantly easier and more efficient.

EBS to S3: Streamlining Data on AWS
While the cloud has revolutionized IT by making it possible to provision unlimited resources with the click of a button, but that facility can have its drawbacks too. What happens in enterprise-level deployments as data grows and resource usage increases over time, both for the primary deployment as well as for the AWS backup copies? The answer is a bill that gets higher and higher by the month. What can you do to limit these costs?

In this blog post, we introduce you to one solution: streamlining data from EBS to S3, where the costs of storage are much lower, especially for infrequently used backup copies.

Read more in EBS to S3: Streamlining Data on AWS

AWS Backup and Restore: The Basics and a Quick Tutorial
There are several ways to backup and restore data on Amazon Web Services (AWS). Learn about service options provided by Amazon for backup and restore, and get a step by step walkthrough for backing up and restoring via the central Amazon Backup service.

Read more: AWS Backup and Restore: The Basics and a Quick Tutorial

AWS S3 Backup: Why, What and How to Backup to S3
Amazon S3 lets you store and retrieve large amounts of data from anywhere. Learn how to backup both Amazon cloud resources and on-premise resources to low cost S3 storage, discover storage tiers and other backup-specific S3 features.

Read more: AWS S3 Backup: Why, What and How to Backup to S3

Together with our content partners, we have authored in-depth guides on several other topics that can also be useful as you explore the world of data breaches.

Learn how organizations classify large scale datasets in order to better secure and protect their most sensitive and valuable data.